The 3 Common Exercises That Lead to Back Pain

The 3 Common Exercises That Lead to Back Pain

Step into any fitness club and you will see members performing a variety of exercises in an effort to strengthen their ‘core’ – the group of muscles that surrounds the spine.

The problem is that many of the most common exercises that are traditionally used to strengthen the back and abdominal muscles may actually be doing more harm than good.

I still find it amazing at the number of back pain patients I see who are doing inappropriate exercise at the gym. Instead of these exercises helping they are actually one of the reasons they are in pain and in my office!

So in this article I am going to discuss 3 of the most common exercises I see people do at the gym that may actually be damaging their spines. 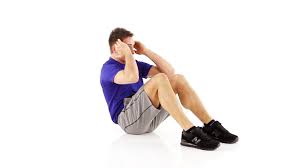 Ok, the sit-up does work the abs, but it also places a lot of stress on the spine.  For example, Professor Stuart McGill, a leading spine researched has measured the compressive force on the spine to be more than 730 pounds with each sit-up.

To put this into perspective, the National Institute of Occupational Safety and Health does not allow repetitive loading above this in the work place as it has been linked with higher injury rates in workers. So performing this as a regular exercise is not a good idea, especially if you have or are recovering from lower back pain.
As an alternative, a Modified Curl-Up can be used that will produce similar activation levels to the abdominal muscles (in other words it will be just as effective in training the abdominals), but places much less stress on the spine. (you can review the Modified Curl-Up in our exercise library) 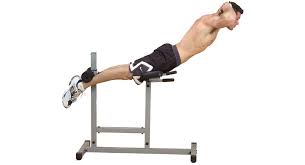 Perhaps one of the most common exercises used to strengthen the lower back is a back extension on a Roman chair.  This is the exercise where people hand their upper bodies over a bench with their feet braced and then pull their trunk back up over the bench.

Again, this will work the muscles of the lower back, but will also place a lot of stress on the spine.  In fact, about 890 pounds of compression.  So just as we saw with a sit-up, the training effect gained by the muscle activation cannot be justified against the compression load for the average person.  When I see people do this holding a weight in their arms is when I really cringe! 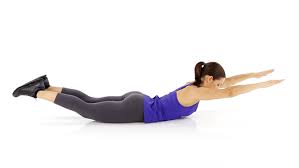 The superman exercise is the exercise where someone lies on their stomach then raises their arms and legs back by extending their spines.  This exercise is a poor choice for most people for the same reason as Back Extensions – there is too much compressive stress on the spine (there is actually 1300 pounds of force with this exercise – 2x as much as the sit-up).

This exercise is especially concerning as it is commonly prescribed to low back pain patients by their doctor or therapist!

As an alternative to the back extension and superman exercises try a Trunk Extension exercise using a gym ball.  Alternatevely, functional exercises such as a dead-lift or squat will also help to strengthen the lower back muscles.  But when performign these exercises remember form is critical.  (you can review all of these exercises in our exercise library).