This is the second article in 3 part series discussing the effects of scar tissue on pain and common musculoskeletal conditions.  The first article provided background information on what scar tissue is and how it develops, and discussed how scar tissue can cause muscles to become tight, weak, and painful. (click here to review the first article).

When we think of muscles we often think of them in isolation. For example, where is the biceps muscle? or what does the quadriceps muscle do?  But in the real word this is too simplistic.  We also need to be aware of how muscles move and interact with each other.  For example, one of the key things muscle need to be able to do is to slide and stretch against each other.

You see within the body muscles are arranged in layers which overlap each other. As different muscles begin and end at different locations, and because these various muscles stretch and contract at different times and at different rates, each muscle and muscle layer needs to be able to move and slide against the other structures they come in contact with.

When scar tissue is formed along damaged muscles, in many cases it can cause a muscle to become stuck or adhered to an adjacent muscle. This will have 2 major effects: first, it will greatly limit limit flexibility and mobility; and second, will compromise strength. 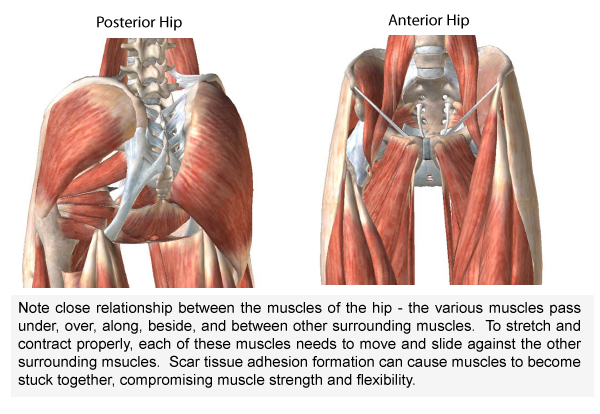 Here is a simple analogy…….. imagine a rope tied to a stone.  To pull the stone towards you you pull on the rope.  The pulling force you generate is transferred through the rope to the rock.  Now imaging the rope being surrounded by several other ropes, and the rope you are pulling on is tangled and stuck with another rope.  In this scenario, as you pull on the rope some of the force is caught and dissipated at the tangle, and less force reaches the rock.  You now have to pull much harder for the same effect.  This same thing happens within the body, making muscles work much harder than normal.

This not only wastes energy and makes movement and muscle contraction  much less efficient (this is a bid deal for athletes and people with physically demanding occupations), but this creates abnormal and excessive stress on the body which over time can lead to larger scale tissue damage and pain.